Previous Next
End of year celebrations

The Annual Dinner Dance was held last night in Casey’s Hotel and as is now the norm – was “a sell out” event.  Members young and not so young gathered for dinner, the annual prizegiving and dancing.

Commodore Niall O’Neill reflected on the year and the spirit of what makes Baltimore a very special club.  Five classes held regional/national events during 2019 in Baltimore – Lasers (Munsters), Topaz (Southerns), National 18’s (South Coast Champs), Moths (Nationals) and 1720 (Nationals). He thanked all members for their assistance and help during his two year tenure as Commodore and handed over to Vice Commodore Charlie Bolger for the prizegiving. 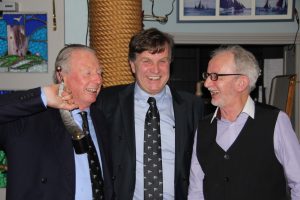 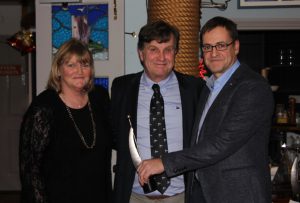 The “John Daly Perpetual Trophy” for the most improved junior sailor was awarded to Richard Buckley.

The “Tom Fuller Memorial Award” – Commodores Trophy was awarded jointly to Dee Griffiths and Deirdre Horgan for their contribution to the organisation of various activities and initiatives during the year. 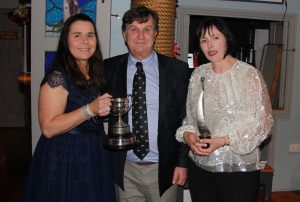 The Annual General Meeting was held this afternoon in the Clubhouse.  It was great to see a large turnout.  Niall O’Neill outgoing Commodore handed over the Commodore’s burgee to incoming Commodore Charlie Bolger.  Grahame Copplestone was elected as Vice Commodore and Ruth Field was nominated and elected as a new Committee member.  Prizegiving photos can be found here. 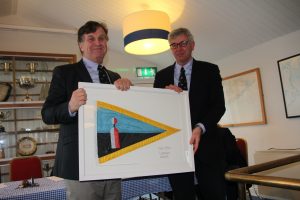 Niall O’Neill accepting a presentation of a past Commodores Burgee from Charlie Bolger.