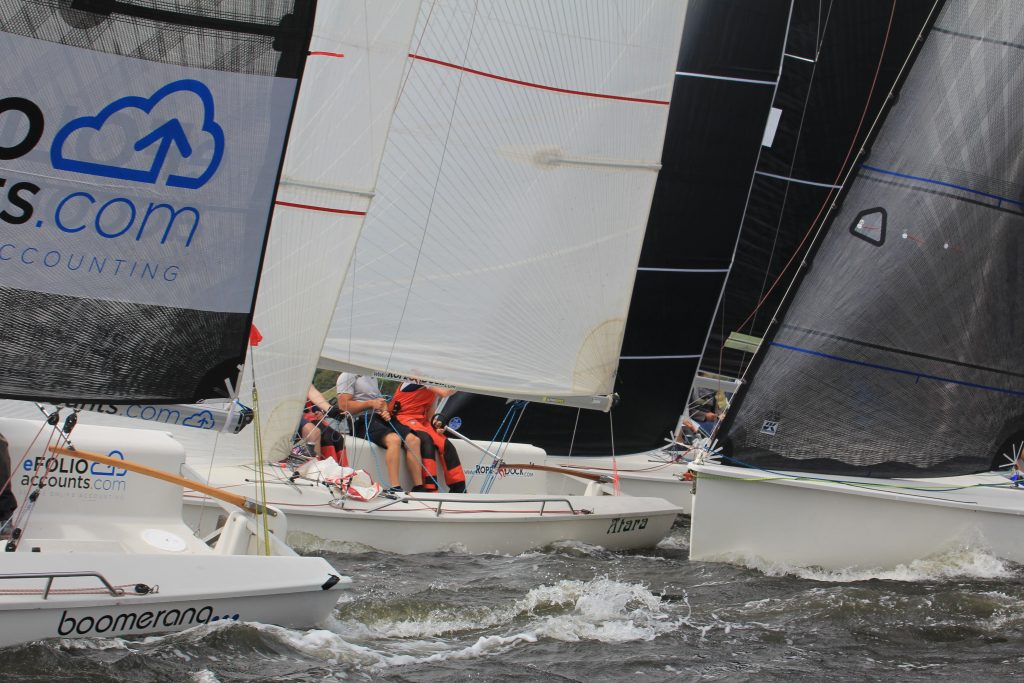 At the Day One prizegiving Commodore Charlie Bolger paid particular thanks to Rob O’Leary for pulling the whole event together including the outdoor socially distanced reception.  He thanked the race management teams and numerous volunteers that made running the event possible.

The Officer of the Day on the 1720 racecourse Colette O’Flynn got three races away on Saturday in a light 6 – 8 south westerly breeze.  Race One was won by Rope Dock Atara – Ross McDonald/Robbie English, Race two went to T-Bone – Tom Durcan/Clive O’Shea and race three went to Dutch Gold – Rob O’Leary.

Rob O’Leary, Sailing Secretary and event organiser went into day two as the overall leader ahead of his father Anthony by two points.

In the Heir Island Sloop World Championships there was an upset to the winning ways of Declan Tiernan and Marty O’Driscoll as Cormac O’Hanlon and Jim O’Mahony took the first race.  However, that upset was soon corrected with Declan and Cormac in Brigid taking the next two wins.

Michael Walsh OD of the sloop fleet ran racing under Hacketts within the Harbour.

The sun shone on Sunday morning welcoming the fleet afloat which was thankfully different from the initial forecast of rain.

A lovely 8 knot westerly allowed the fleets to use the harbour racetrack to it’s best advantage allowing those onshore to view the spectacular kites race down towards the lifeboat station before beating back up to Sherkin.  Like Saturday it was extremely tight racing with only a few points between each boat.   Race four was won by Déjà Vu helmed by Ross Johnson who led from the start line after port tacking the fleet.  Race Five was a bullet for Spiced Beef helmed by Fionn Lyden and Race Six was another win for T-Bone.  A testament to the tight racing, from the series of six races there were five different winning boats.

The Baltimore Cup was won by Rob O’Leary – Dutch Gold and his crew winning on countback as he was on joint nett points with Finaleg helmed by Anthony O’Leary.  In third was another local boat – Spiced Beef – Fionn Lyden.

The Sloop fleet had an addition to the line up on Sunday morning as Copplestone’s boat – Sarah Aoife went racing with Eric Geary and John McCarthy taking to the water.

Eric and John led the sloop fleet in commanding fashion and took three wins on Sunday.  However, it wasn’t enough to secure the title from Declan Tiernan who is the winner of the Heir Island Sloop Championships 2020 with crew Marty O’Driscoll.  In second was Kate – Cormac O’Hanlon and Jim O’Mahony and third was Sarah Aoife – Eric Geary & John McCarthy.

Full results can be found here.

Any cookies that may not be particularly necessary for the website to function and is used specifically to collect user personal data via analytics, ads, other embedded contents are termed as non-necessary cookies. It is mandatory to procure user consent prior to running these cookies on your website.