Previous Next
Women on the Water 2019

Last Thursday 15th August saw the cumulation of lots of work by Pat, Odharnait and Diarmuid Collins who along with Ruth, Liz and Catherine Anne Field and many supporters helped make a wonderful tribute to the memory of Joan.  Women on Water (WOW) was started back in 2014 by Joan while she was Commodore and held bi-annually and has raised €40,000 todate.

Joan always had a wonderful team of volunteers with her in organising these events and she received many contributions of sponsorship and auction prizes from local businesses and this continued again this year. 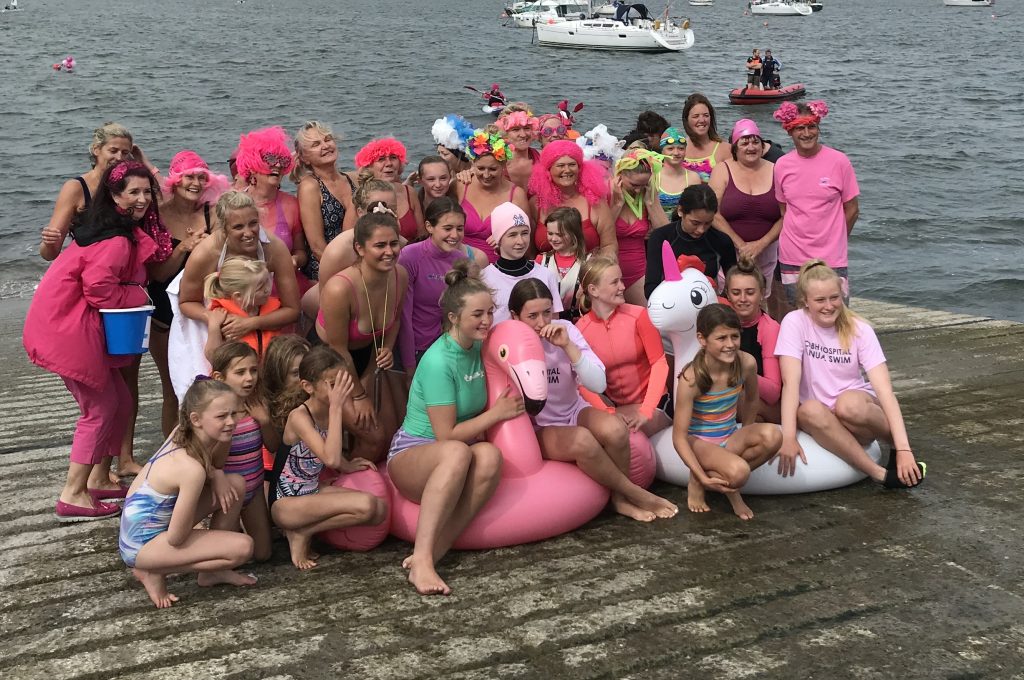 Firstly there was a swim at 1100 hours on the new slip – well done to all that took the plunge, many dressed in pink costumes along with various hair pieces and floating animals!.

Registration commenced at 1400 hours with Tom Hegarty taking on Officer of the Day/MC duties.  Everyone wore pink in some shape or form with many hilarious outfits donned by the assembled crowd.  52 boats registered to take part this year which was up from the 25 that participated last year.

The fun commenced around the village with a treasure hunt.  The sucker fish in Jacob’s Bar proved difficult to count however the cost of the tinned kippers in Cotter’s was thankfully easier for all to decipher!. 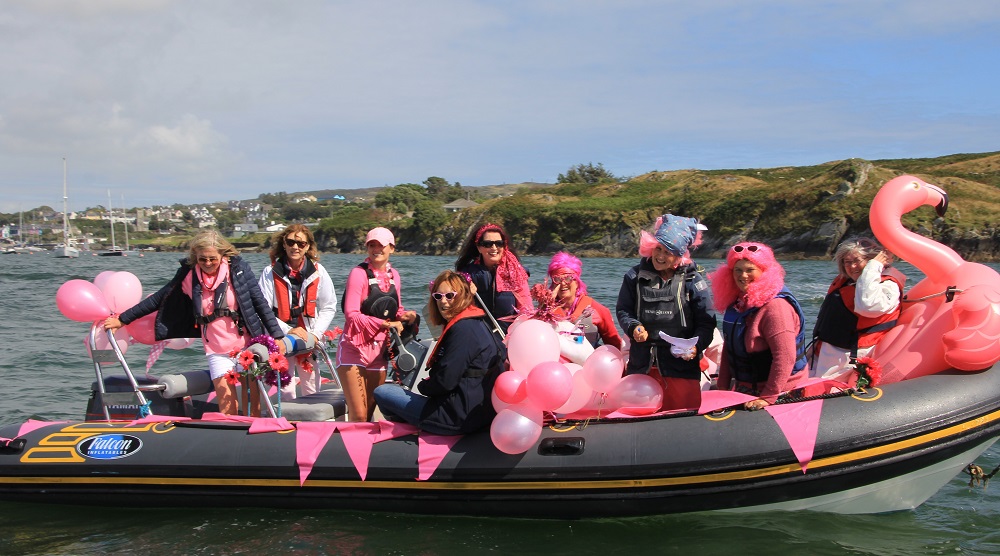 Onwards we went to the various locations in the harbour by boat which took in the RNLI station, the Loo and Sherkin Pier.  Many participants used their younger crew to do the running to seek out the clues at the Abbey before returning to the water to raft up on the Sherkin House pontoon.  However, it was not a race as Tom reminded us over the tannoy!.  Completed questionnaires were returned and there was some chat and fun in the afternoon sunshine.  A group shot was taken under blue skies before everyone returned to the clubhouse for food and the raffle/auction.

Odharnait Collins kicked off proceedings in the Club and spoke about her Mum and what the day meant to her.  She highlighted the great work of Breakthrough Cancer Research and thanked everyone for participating and giving so generously. 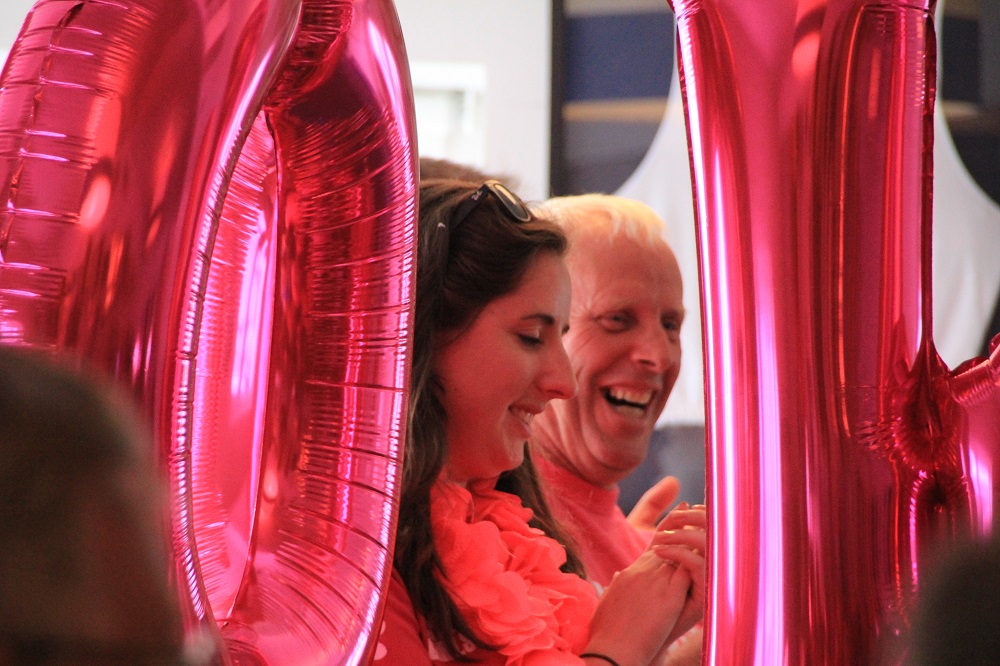 Best Dressed Child – there were too many to adjudicate amongst so a number of prizes were handed out in this category.

The Best Dressed Boat was hotly contested and after an independent adjudicator cast an eye over all entries the winning boat was the Bushe Family.  They were awarded the Joan Collins Memorial Trophy which was commissioned by the Collins Family. 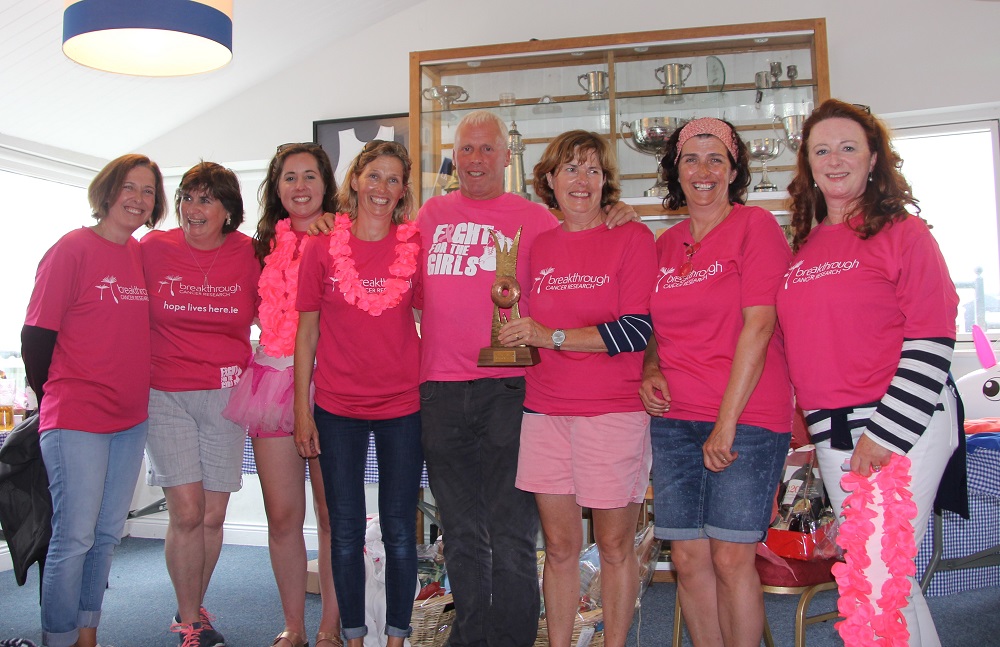 Given there were 50 lots in the raffle and everyone in the club was clutching a handful – full marks to Ruth Field who ran off the raffle with great aplomb and held the audience’s attention throughout.  No easy feat!.

The silent auction was then announced with the top lot of a painting very kindly donated by Majella O’Neill Collins receiving great interest and bids.

The revellers then moved to the square where “Collage” entertained into the wee hours of the morning.

A once in a lifetime day – the sun shone on us all.

Photos from the day are in the club gallery here.