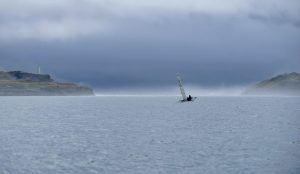 The International Moth Class visited Baltimore last weekend and we were delighted to host their Irish Nationals sponsored by The Waterfront, Baltimore.  It was great to see some of the early arrivals whizz around the harbour on Wednesday and Thursday.  Friday saw Race Officer Robert O’Leary set a course for the Moths around the harbour and eight boats competed with David Kenefick of Royal Cork claiming the first bullet and Alistair Kissane from Howth taking the second bullet ahead of Kenefick.  Day prizes were presented along with hot pizzas to the sailors by Youen Jacob of The Waterfront.

Saturday morning dawned with the forecasted high winds so sailing was abandoned for the day.  This allowed the sailors to do running repairs on their rigs following their first afternoon on the water.  Sunday morning was a different day with very light breeze and the race management team patiently waited off the Beacon until they could get racing underway.  Three races were added to the scorecard David Kenefick again taking the first bullet but Alistair Kissane then took the next two with Ricky Tagg and Fionn Conway coming into the mix for third spot.

Overall Ricky Tagg on Rattler who had travelled from the UK secured third with net 11 points.  David Kenefick was second with a net of 6 and first was Alistair Kissane with very consistent racing over the weekend.

Some photos can be found in the website photo gallery. Full results can be found here.  Photos used in this article courtesy of Moselle Foley. 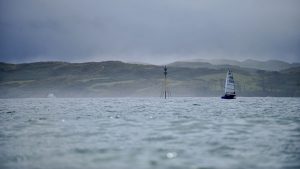