Back on the water

Previous Next
Back on the water

The past week as seen a flurry of activity around the harbour – conclusion of Clinic one for our level 3 sailors, 1720 lift in on Friday evening, sloops launched and moorings filled.  We even had an unusual yellow visitor from Cork on Saturday – Thunderchild II. 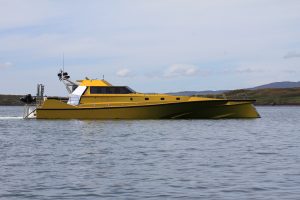 Saturday morning saw 24+ of our junior sailors launch to compete in the first day of the Lousy Cup League.  Officer of the day – Philip O’Connor had an “all in start” for the various fleets and got two races away. A lovely mixture of boats from Topaz’s to a mirror dinghy enjoyed the sunshine and light breeze. Results can be found here. In the afternoon, OOD Colette O’Flynn started the 1720’s and sloops on their first races of the season. There were lots of smiling faces – evidence that everyone was delighted to be back on the water. It was great to see five 1720’s on the water with more due to be launched. Fionn Lyden and crew won both races claiming the John O’Flynn Memorial Trophy – full results can be found here.  The four Sloops also completed two races with Declan Tiernan and Marty O’Driscoll claiming two bullets on the day – results here. Orders placed for the July “drop” will be available week beginning 20th July (we will be in touch with all those that placed orders up to 6th July).